How to Start and Keep a Conversation Going with Anyone 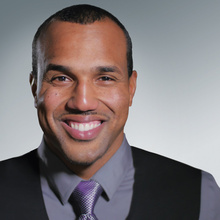 Arel Moodie is a national best selling author and has been a featured speaker at the White House and has been personally acknowledged for his work by President Obama.

Inc. Magazine called Arel a “High-Energy, Motivator” and named him to their “30 Under 30 list” of top American entrepreneurs under 30 years old joining people like Mark Zuckerberg, founder of Facebook.

Arel was named by the prestigious St. Gallen Symposium in Switzerland as one of the 100 Leaders of Tomorrow.

Black Enterprise Magazine named Arel as one of their “Tycoons Under 35”.

Arel Moodie has giving many popular TEDx talks including topics such as likability and innovation. He hosts one of the top career podcasts on iTunes, The Art of Likability, which is listened to in over 130 countries world wide. He is a contributor to Forbes and Huffington post as well.

Arel grew up on welfare in the projects of Brooklyn, NY where he witnessed those around him being murdered and imprisoned. Using determination and applying what he teaches in his presentations he was able to build multiple 6 and 7 figure speaking businesses.

As a professional speaker he has spoken to over 500,000 people in 48 states and 5 countries.   For fun, Arel likes to dance; he has performed at Madison Square Garden and his wedding dance video on YouTube has over three million views

The Art of Likability (TAOL) QuickStart
I) The Fundamentals
II) What to do During the Conversation
III) Create Social Super Powers and Go the Next Level
Bonus Content
We suggest moving this party over to a full size window.
You'll enjoy it way more.
Close
Go Fullscreen